Acute Kidney Pain: Is It A Stone? 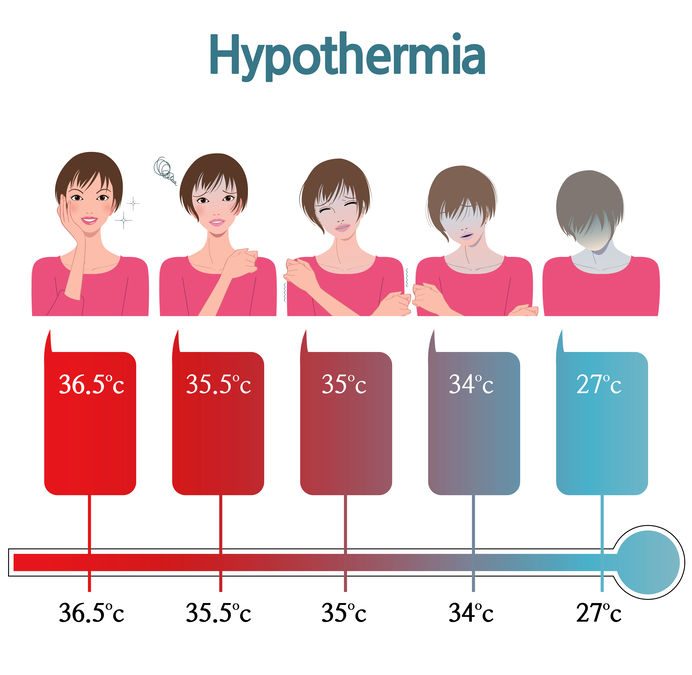 Cold injuries result when the body is exposed to cold temperatures and damaged. Such injuries divide into freezing and non-freezing injuries (if the ambient temperature is above freezing) and include hypothermia, frostnip, frostbite, and trench foot.

Clinicians must pay caution when treating patients with cold injuries as treatment methods may cause further deterioration or could be unnecessary. The following article will discuss these potential problems with cold injury management.

Hypothermia is the pathological state when the body loses heat faster than it can produce heat. Consequently, the body temperature falls below 35 degrees celsius. If body temperature continues to decrease, complete heart failure and respiratory failure follows, resulting in death.

Rewarming a patient suffering from hypothermia involves different strategies, depending on the severity of hypothermia, which are carried out with caution. In passive rewarming, the clinician leaves the patient’s thermogenic processes to raise their core body temperature back to normal. This is only recommended in treating mild hypothermia.

If the hypothermia is sitting on the mild-moderate scale, a Bair Hugger is needed to actively raise the patient’s core temperature externally. This strategy is especially effective due to its easy implementation.

Patients with moderate-severe will require active core rewarming including warmed IV fluids and warmed, humidified oxygen. If the patient has been refractory to this approach, or if the patient is severely hypothermic with frozen extremities, extracorporeal blood rewarming is performed via cardiopulmonary bypass, haemodialysis, arteriovenous rewarming, or venovenous rewarming. (Walpoth et al., 1997)

In winter, the highest incidence of cardiovascular diseases occurs in the cold winter months. (Fares, 2013) Cold weather means the heart has to work harder to keep the body warm. Vasoconstriction is triggered to increase blood pressure for pumping blood to bodily extremities. In addition, cold weather has also been shown to increase the risk of developing blood clots. (Lichtman et al., 2016) Combined, these two factors implicate increased deaths from cardiovascular disease in the winter months.

Cardiac pathology is also seen in severely hypothermic patients. During severe hypothermia, the heart becomes hyperexcitable and any mechanical stimulation (such as CPR or moving the patient) can result in fibrillation, leading to death. Therefore, clinicians during the management of such a patient must be careful not to trigger ventricular fibrillation in a hypothermic heart.

If ventricular fibrillation (VF) does occur, VF should be treated immediately with defibrillation, even though most other dysrhythmias will correct with warming alone.

The treatment of patients suffering from severe hypothermia remains difficult due to the potential of cardiac arrest, but slow, non-invasive rewarming like the Bair hugger is considered ineffective. Rewarming quickly via extracorporeal blood rewarming can cause a major complication called “core temperature afterdrop” where the combination of increased peripheral vasodilation and shunting of lactic-acid (rewarming acidosis) passage to the heart may result in heart arrhythmias. Though this approach is risky, it is still effective in returning the patient to a healthy core temperature.

Frostnip occurs due to vasoconstriction, where the body reduces its ability to lose heat. The skin can feel irritated, become red, and potentially numb. Frostnip is considered as the step before frostbite but doesn’t permanently damage skin and is therefore considered reversible. To treat frostnip, the affected area of skin needs gradually rewarming, and the person should stay out of the cold.

Frostbite results when the skin and underlying tissues freeze due to cold exposure. Frostbite most often occurs on the ears, fingers, toes, nose, cheeks, and chin; and starts superficially before penetrating the bones, tissues, and joints, to become more severe. An X-ray, bone scan, or MRI will decipher the severity of frostbite.

When treating frostbite, it is important that the process of rewarming the affected area is uninterrupted as incomplete thawing is hazardous to the tissues. Clear blisters must also be removed. However, in severe cases, any further removal of dead tissue must be performed after reviewing the affected area in 1-3 months, as the development of dry gangrene is a slow process. Amputation may be required.

To treat trench foot, the affected feet are elevated to increase circulation. The feet should be kept clean and dry, and the patient should be prescribed bed rest until the feet are ready to weight-bear again. (Nagpal & Sharma, 2004)