Why being boring may be good in an expert witness

Dislocated knee and dislocations of the patella 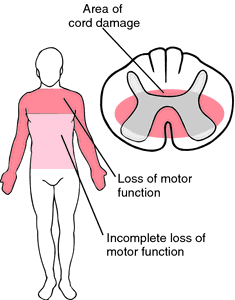 Emergency Department doctors must be aware of some of the less common disorders that may be causing symptoms presenting in the Emergency Department. Central cord syndrome is one such disorder, a rare syndrome that can cause abnormal neurological symptoms and signs but not with a recognized pattern such as a horizontal level of disability ( such as paraplegia) or one sided abnormalities in upper and lower limbs (as in a stroke). Doctors should be aware of the signs of central cord syndrome, as well as the importance of early intervention to improve outcomes in the long term for patients suffering from this disorder.

What is central cord syndrome?

Central cord syndrome is the most common kind of partial spinal cord injury. Patients with central cord syndrome often present with impairment in the arms and hands, and sometimes in the legs. In central cord syndrome, signals from the brain to parts of the body that are below the location of the injury are reduced but not completely blocked. This can cause neurological symptoms that can be mistaken for other, more common, disorders.

Central cord syndrome is most commonly the result of an injury or physical trauma, with the condition most often occurring in older persons who have pre-existing myelopathy due to degeneration in the spine. After a minor trauma, such as a trip or a fall, this can then cause a serious spinal cord injury due to the pre-existing vulnerability.

Neurological signs to look out for

– Paralysis or loss of fine movement in the hands and arms, and to a lesser degree in the legs

– Sensory loss below the location of the injury

Considering  central cord syndrome as a possible diagnosis early is key to maximising recovery in the long term for most patients.

The key investigation after CT scan has ruled out a significant bony injury is an MRI scan while protecting the spine in a collar.

MRI images can be used to confirm the suspected diagnosis and effectively measure the degree of spinal cord compression and vertebral instability; this can also indicate the likelihood that patients will recover naturally from the disorder.

Early medical intervention soon after the injury takes place improves overall outcomes, with many people recovering substantial function. Most patients whose legs are affected do recover the ability to walk, with recovery generally starting from the legs and moving upwards; recovery of function in the hands is usually seen last if recovery occurs at all. Overall, younger patients have a better prognosis for long-term recovery than do patients over the age of 50.