Differentiating Appendicitis in the Emergency Room 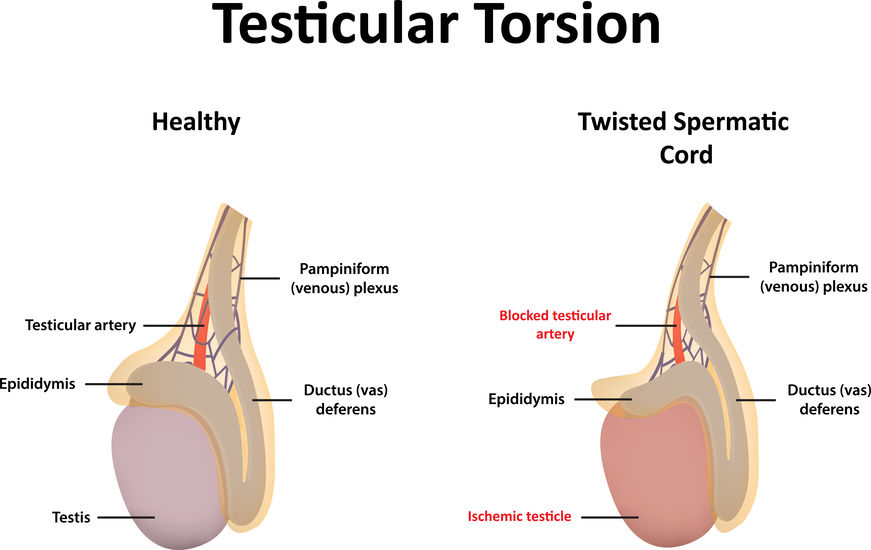 When a patient presents to the Emergency Department with testicular pain, an accurate diagnosis may prove difficult as there could be any number of underlying causes. Some of these, such as epididymitis, or inguinal hernia, can be less urgent. On the other hand, a diagnosis such as testicular torsion can have serious consequences if not identified in a timely manner. Missed diagnoses and diagnostic delays, especially in the case of testicular torsion, can lead to testicular loss and infertility. Many such cases have resulted in clinical negligence litigation. (Gaither & Copp, 2016)

For a clinician faced with the complaint of testicular pain, it is important to be aware of the most common causes, how to rule them out and how to proceed if torsion is suspected. The National Institute for Health and Care Excellence (NICE), once again provides useful diagnostic tools for scrotal pain and swelling based on the British Medical Journal (BMJ) best practice guides.

Testicular torsion, the twisting of the spermatic cord, is a urological emergency that, as stated in the  NICE guidelines, needs to be diagnosed and treated within 4-8 hours of onset of pain to achieve the best outcome. One in 4000 males younger than 25 are affected annually and 42% of surgeries for testicular torsion result in an orchidectomy—the removal of one or both testes. (Kroger-Jarvis & Gillespie, 2016)

As mentioned above, due to the diagnostic uncertainties and errors which can delay necessary treatment, testicular torsion misdiagnoses often lead to clinical negligence litigation. One such case involved a 14-year-old boy whose father took him to the ED due to intense abdominal and scrotal pain accompanied by nausea. The boy had a previous history of testicular torsion, which had resulted in the loss of his left testis. He also described past episodes of intense pain in the groin area.

The attending physician pronounced a diagnosis of epididymo-orchitis, a bacterial inflammation of the tube at the back of the testes, sending the boy home with a prescription for antibiotics. The doctor relied on the assumption that the surgeon who removed the boy’s left testis would have secured the other one in place. That is indeed the customary practice, however it had not been carried out in this case. Three days later the boy’s remaining testis became gangrenous and had to be removed. The court ruled that the boy’s infertility could have been avoided and a substantial sum was ordered to be paid out.

Contrary to the actions of the clinician in this scenario, NICE guidelines recommend immediate admission to urology or paediatric surgery if torsion is suspected. Moreover, these guidelines indicate that there is a high predictive value of testicular torsion when abdominal pain and vomiting are present. It is recommended that clinicians treat past episodes of pain as spontaneous torsion and distortion and that they forego imaging when a history of torsion exists. A negative surgical exploration is considered to be preferable to a missed diagnosis in this scenario.

As the case reviewed above illustrates, it is best to not make any assumptions but rather rely on best practices to guide you through to the most appropriate diagnosis. “If the consequences for the patient would be profound if you are wrong, dismissing a diagnosis without confirmatory investigation results is an extremely risky undertaking.”