How to get paid: strategies for receiving timely payments for your medicolegal work 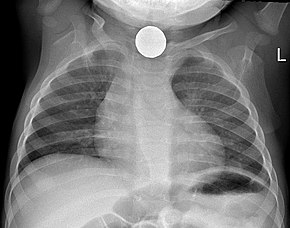 An ingested or inhaled foreign body (FB) is a common reason for presentation to the Emergency Department. Although this problem can be encountered in every age group, almost 80% of cases comprise patients in early childhood. (Erbil et al., 2013) Accidental aspiration into the airway is a widespread clinical scenario among children under 3 years. Moreover, it is the leading cause of infantile deaths and the fourth one among preschool children. (Salih et al., 2016)

Clinical presentation and symptoms can vary. An inhaled FB will often have more evident symptoms than an ingested FB. Clinical management depends on the type, size and location of the FB and its location within the GI or respiratory tract. The attending physician must be familiar with clinical guidelines and recommendations for a patient presenting with an ingested or inhaled foreign body.

Inhaled FBs can get lodged at any site from the upper airway to the terminal bronchioles. To maintain an airwy sufficient to allow adequate oxygenation need about 3mm3  of patency the size of the hole on the top of a BIC pen after its design changed following such an aspiration when the child died. An inhaled foreign body is more likely to enter the right rather than the left min bronchus as this has a less acute angle form the trachea. (Kumar et al., 2010) Symptoms vary widely, from none or minimal discomfort to respiratory compromise. The witnessing of foreign body inhalation by a parent is one of the most reliable diagnostic tools. Subsequent symptoms include sudden and intermittent coughing or choking. Fibro-optic bronchoscopy is the gold standard of diagnosis, whereas retrieval is customarily performed by rigid bronchoscopes. This ailment requires high levels of suspicion so that a serious, often fatal outcome may be prevented. The types of inhaled foreign bodies often vary by region, for example, 91% of western patients inhaled organic materials, peanuts account for half of that. This is important as peanuts left in the respiratory tract can cause a chemical pneumonitis which has long term consequences for the patient

Ingested FBs often present with no symptoms other than parental suspicion of an object having been ingested. Other possible symptoms can include coughing, drooling of saliva, pain on swallowing, reduced oral intake, abdominal pain or vomiting, melaena or GI bleeding.. With larger foreign objects which are lodged in the oropharynx and pose a risk of impaction, surgical intervention may be necessary. An especially dangerous scenario occurs with ingestion of button batteries and magnets. If an ordinary foreign body has reached the stomach, it reduces the risk of complications considerably, however, if it is suspected a button battery or magnet is lodged in the GI or respiratory tracts that should be considered a high-risk case that requires consideration of urgent intervention.

To investigate whether a patient has swallowed a metallic foreign body and its site rather than subjecting patients to X-rays a metal detector has been advocated both to look for the presence and if it is above or below the diaphragm. With the exception of button batteries and magnets if the metal is below the diaphragm it can be safely left to pass unless the patient becomes unwell with abdominal pain.

It is more difficult for a clinician face with a none metallic foreign body as they are unlikely to be visible on X-rays and unless the patient has symptoms suggestive of peritonitis, bowel obstruction or difficulty swallowing a watch and see approach can be followed although warning a patient or their parents when to seek further medical advice.

Appropriate management by the emergency clinician, following the recommended guidelines and paying careful attentions to patient history and clinical presentation can prevent serious or fatal consequences in cases of the inhalation or ingestion of a foreign object.