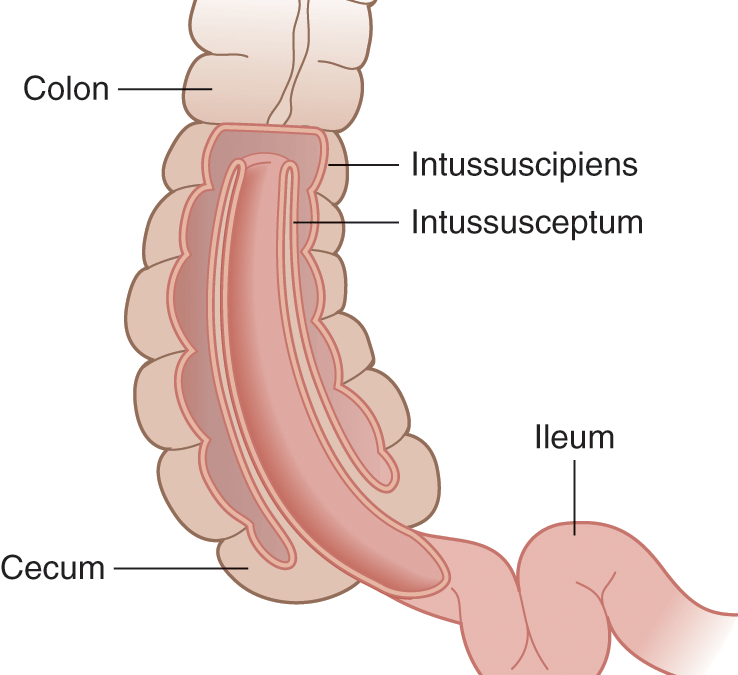 Intussusception is a serious medical problem of the intestine. Diagnosis is complicated by painful episodes that come and go and it can be mistaken for other common conditions such as colic.

The most common cause of intestinal obstruction in children, intussusception can also affect teenagers and adults. It is rare in newborn babies. Abdominal pain is a frequent complaint in the Emergency Department and has many causes. Intussusception should be a primary diagnostic consideration in infants, particularly those aged between three months and three years of age.

Intussusception occurs when part of the intestine slides into the section next to it. Often described as being like when a sock is folded inside itself, the condition causes a blockage or obstruction and stops food that is being digested from passing into the intestine.

Considered a medical emergency, intussusception can cause infection, further complications and death and so requires rapid diagnosis and treatment. In children, the cause is typically unknown.

The symptoms and diagnosis of intussusception

The main symptom of intussusception is severe abdominal pain that comes and goes. This often becomes more constant after 12 hours or so. Infants might cry loudly, draw their knees up and become very irritable.

Patients may also present with lethargy, vomiting or decreased appetite. Where vomiting is present, dehydration is likely and parents may notice fewer wet nappies than usual. The child may look very tired, be pale and floppy. The fontanel on top of the head may become sunken in infants. A child with intussusception may have a high temperature, be sweating, have a swollen stomach and their faeces might contain blood and mucus.

The medical practitioner will perform an abdominal examination to feel for the associated swelling. A rectal examination may be included in investigations. The diagnosis of intussusception will usually be confirmed by an ultrasound scan or abdominal X-Ray. A CT scan may be required if the ultrasound imaging remains doubtful.

Treatment of intussusception will depend on the child’s age, symptoms and general health. Intussusception is not usually immediately life-threatening. However, the effects of intussusception can become serious quickly. Complications include infection, death of intestinal tissue and internal bleeding.

If the patient is dehydrated, then they will require a fluid drip before other treatment starts. A nasogastric tube may be required to drain stomach and bowel contents to reduce discomfort. Antibiotics will be administered to reduce the chance of infection.

An air enema is the usual first treatment in diagnosed cases of childhood intussusception. A small tube is placed in the rectum to release air into the bowel which often helps move the section of the intestine back to its normal place. This will be done under the supervision of an X-Ray to monitor progress. If this is not successful, or if the child is considered not well enough for an air enema, surgery will be required. Complications after surgery and recurrences of intussusception are rare.