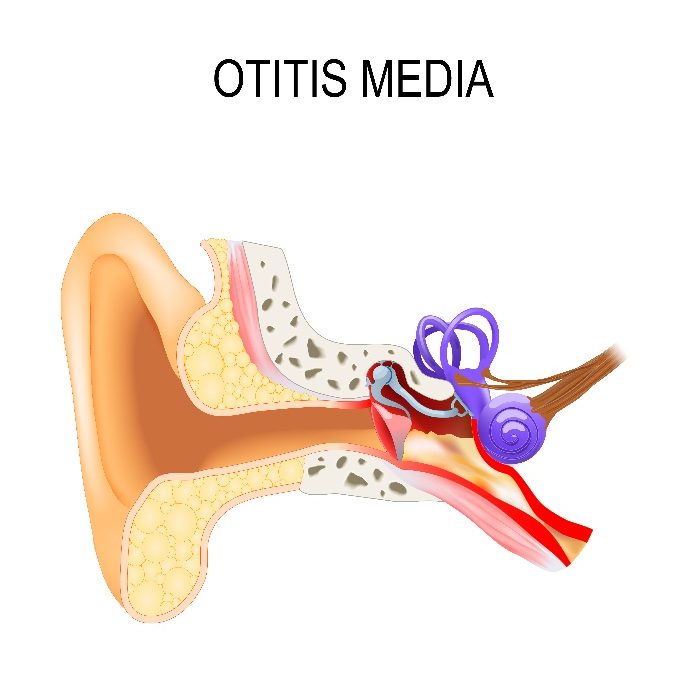 Otitis media is an infection of the middle ear which can cause inflammation and a build-up
of fluid behind the eardrum. It can be developed at any age but is most commonly found in
children, especially infants between the ages of six to 15 months.

Signs that there is fluid built up in the middle ear can include the ear drum bulging up,
being an unusual colour (usually red or yellow), or appearing cloudy when under closer
inspection.

Someone dealing with otitis media may suffer with some pain early on, but the majority of
middle ear infections clear up after three to five days and rarely require treatment of any
kind. In some cases the symptoms may last for up to a week, with something as simple as
placing a warm flannel over the affected ear helping reduce the discomfort.

If, after three days the pain has not reduced in any way or if symptoms begin to worsen
rapidly, it is then considered that extra treatment such as antibiotics is required to help
solve the issue. This is also the case if a child becomes systemically unwell.

What other signs are there?

Other signs to look for include a child suffering from ottorhoea, when a perforated eardrum
caused by otitis media begins to discharge out of the ear. Another symptom that requires
the administration of antibiotics is when a child under two years of age suffers with an
infection in both ears.

How to manage otitis media without antibiotics

Over the counter painkillers can be used to relieve any pain and high temperatures that
someone might be suffering with.

Regular doses of paracetamol or ibuprofen are also useful to help reduce any discomfort.
If the patient is suffering with severe pain then the maximum doses can be applied, subject
to the person’s age.

Ear drops containing an anaesthetic have also been found to be successful in managing
any painful symptoms. Four drops should usually be applied around two to three times a
day for up to seven days.

If a child suffers with recurrent and severe middle ear infections then tiny tubes, known as
grommets, may be inserted into the eardrum whilst under anaesthetic. The tubes drain
fluid from the ear and reduce pressure on the eardrum.

It should be noted that antibiotics are not commonly offered due to the fact the infection
usually clears up on its own, and they make very little difference to the actual symptoms,
such as the pain someone is suffering from.

Not only can antibiotics be fairly futile when it comes to managing any discomfort it should
also be taken into account that they can also cause side effects for children, including:

Because of this, the treatments listed earlier on in the piece are usually the preferred
choice of methods. However, this should also be reassessed if a child is showing
symptoms of a more serious illness or a high risk of complications. In cases such as these
an antibiotic prescription should then be offered.