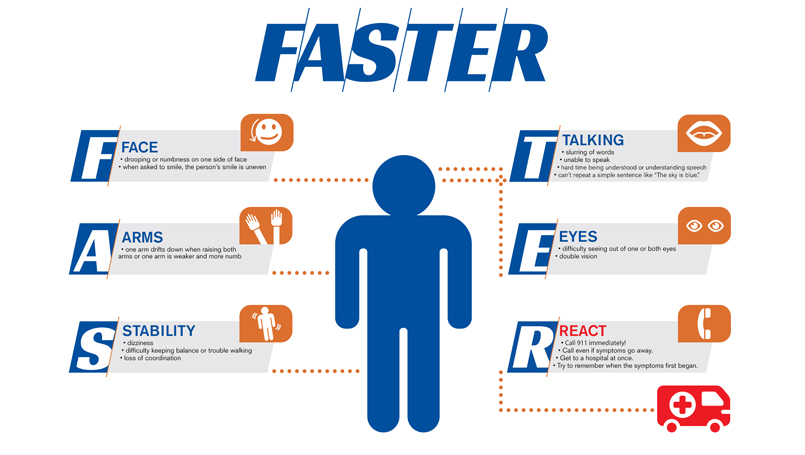 Public health officials promote the acronym “FAST” as a helpful mnemonic that regular people can use to identify strokes.

FAST stands for “Facial drooping,” “Arm weakness,” “Speech difficulties” and “Time.” The first three are common symptoms of ischaemic and hemorrhagic stroke. “Time” simply refers to the need for people to act fast and get medical help to limit damage to the brain. UK health officials first introduced the term in 1998 and it has been in common usage ever since. Medics later extended the acronym to FASTER with the E standing for “Eyes” and the R standing for “React.” The hope was that this would encourage people to contact their medical provider, even if symptoms appeared to go away.

However, the FAST acronym still had limitations. Certain types of stroke do not lead to the symptoms it describes, such as facial drooping, potentially putting patients’ lives in danger.

A posterior circulation stroke happens when an infarction occurs in the vertebrobasilar vascular area, affecting the brain stem, thalami, midbrain, occipital lobes and cerebellum. According to research, approximately 20 per cent of all ischaemic strokes are posterior strokes, occurring in 160,000 people every year. Furthermore, posterior strokes are around three times as likely to be misdiagnosed, even when doctors use advanced CT scan technology.

Symptoms include double vision, headache, vomiting, nausea and slurred speech, but not necessarily facial drooping. Studies show that dizziness and vertigo are the most common, affecting around 47 per cent of patients (in a study of 407). A further 31 per cent had weakness of the muscles around the mouth (hampering their speech), and 27 per cent had either nausea or vomiting after an episode. Only a relatively small 5 per cent presented with a loss or alteration of consciousness.

The most common treatment for posterior circulation strokes is intravenous thrombolysis. This technique involves the injection of drugs that break down clots blocking the flow of blood to the brain. Usually, patients require treatment in the hospital. Doctors give anti-clot drugs to break down the blood clot and prevent it from dislodging and creating a new blockage elsewhere. Blood thinner medications may also be prescribed.

However, if the people around the patient cannot identify the stroke because they are following the Powered by TCPDF FAST scheme, the patient may not get the help they need, putting their life at risk. Often, posterior circulation strokes symptoms develop over the course of several days, leaving victims feeling increasingly confused.

In summary, while the FAST acronym works for the majority of strokes, it is not sufficient for all. Using the scheme, those around the patient may falsely conclude that they have not had a stroke when they have. Therefore, observers (and patients themselves) should look for other signs, including vomiting, change in consciousness, and weakness around the mouth.